Happy April Fools day, y'all. The world's in a rough state, so rather than play a trick on you, I've played a trick on myself. Since 2014 folks have been asking for LOVE to run at 60 frames per second instead of 30, and I've wanted to do it, but it's never been as simple as flipping a switch. All of the game's logic is tied to its framerate, which is a big part of why the game feels as good as it does. In order to run at 60, every single moving or animated object has to be recoded to the new framerate. For the most part that's a matter of dividing each number by two, but for some of my very poorly coded objects it wasn't quite so simple. 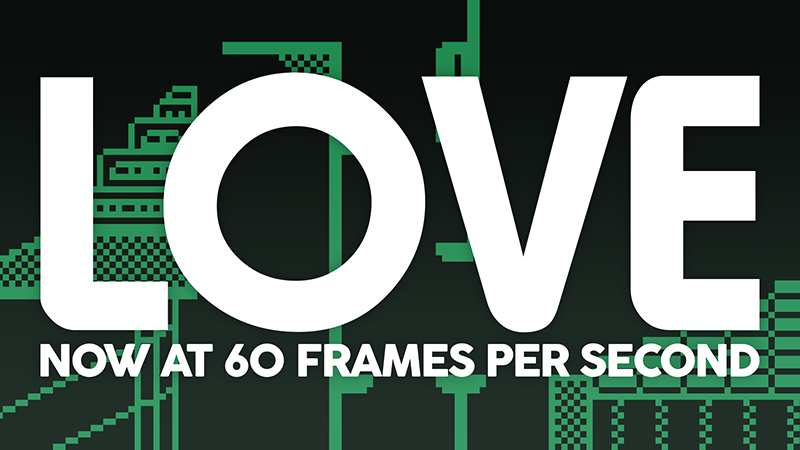 But I did it. I took the time and recoded every single object in the game to run at 60 frames per second, and it feels marvelous. The weight of shame has been lifted from my shoulders, and I can once again recommend that people play LOVE instead of just asking them to please, please, please play LOVE 2: kuso instead. Now there's enough reason to suggest new players to check out LOVE to see what's changed between it and its sequel.

Why put in the effort on a SIX YEAR OLD video game? Well, because of y'all. All 118,000+ folks who have LOVE across Steam, Itch.io, Nintendo Switch, and even Ouya. If I have the opportunity to make something better for that many people, I'd be a fool not to.

So here's a free update to a game you've had for a while. Maybe you never even played the previous version of the game, and if so, here's a great new game to play. And since I had to go through all this effort, I also cleaned up a lot of the other parts of the game, and fixed bugs that have been bugging me since 2014.

Changes:
• The game runs at a full 60fps now. No, I won't be supporting 120fps.
• The game's also been ported to Linux / SteamOS.
• All objects now update and function at 60fps.
• The game has moved to Game Maker Studio 2's YYC compiler instead of the VM one, which should result in better performance.
• Coyote Frames have been added as a quality of life improvement. This gives the player five additional frames (One-twelfth of a second) after walking off a platform to hit the jump button.
• Your checkpoint can die now, so don't leave it sitting under some acid or on a disappearing platform
• Bouncers now affect your momentum whether you have already jumped or are falling, and you can't accidentally make yourself fly downward.
• Removed a bug where a player could keep their vertical position as long as they let go of the jump button every frame forever.
• The scoring system has been completely revamped and is now much more clear.
• One of the bonus levels was removed.
• Three bonus stages (demakes) from kuso have been added
• The options menu has been completely replaced with a far more functional one. You can adjust audio levels, and screen scaling.

I still have some small updates in mind for LOVE, but for now my focus is elsewhere: LOVE 3 has begun development. In the meantime, check out LOVE 2: kuso, and my other title Pulstario. They could use your appreciation.

From the bottom of my heart, thank you for your years of support. If you wanna talk with me, reach out via Twitter (@thatsmytrunks) or e-mail me at fred.t.wood at gmail dot com. We've also got a Discord where we talk about all sorts of stuff, so come join us. I hope to keep making games that you enjoy playing.

An accessible platformer with a focus on a fair challenge.